Throughout the 4 previous months I got the chance to work on php applications again. This time not as a developer, but as an operator. I spent a good part of my internship trying to deploy, run and optimize php apps on my local environment and on the cloud.

This post will be in many parts (4+). This part will be a sort of introduction to the php ecosystem. We’ll try to build a general overview on the different ways we can deploy a php application. And in the next parts we’ll dive deeper on the process and go through the different solution in the market.

This series is based on my own experience only, and especially on the challenges I faced and how I did overcome them.

What I find really weird and confusing (sometimes powerful) about PHP, is the absence of a strict definition and sometimes borders between the different language components.
Unlike python, ruby, GO, C … there is no such thing as a standard library in PHP, (SPL is actually a separate php extension containing some useful classes and functions).

Also there are a lot of extensions, some are written in C and should be compiled against the PHP Source, and others are written in PHP itself and can be run in Zend Engine.

In PHP’s world there are two types of extensions:

in this part, I’ll use “PHP extensions” for C extensions and “PHP package” for userland libraries written in PHP itself.

PHP packages (written in PHP) are often easier to install, we can find them in PEAR (PHP Extension and Application Repository) or elsewhere (often in git repos).

To install a PHP package we can either use the pear cli tool or simply composer. Even if pear cli can install PHP extensions (written in C) while Composer can’t, the latter is more modern and has many more features including dependency management, easier installation, multiple sources (can fetch packages from PEAR and from version control systems(git) too), per project packages (with pear all package should be installed globally) …

As for native PHP extensions, there is no way just yet to install them using composer. For this reason you should use pecl cli tool (which is an alias for pear) or compile them manually, or maybe if you are lucky your linux distribution will already have the extension you are looking for in their official repositories.

In the containers context, php docker images come with a collection of neat tools (docker-php-ext-*) which can be used to install/compile php extension. (I’ll leave that for the next post).

Running a web application requires 2 layers: an HTTP layer which will handle external HTTP requests, and return HTTP responses, and a processing layer which will take care of interpreting the backend code.

Here is a very good article about the deploying web apps, you can read it if you want to learn more. What I called the processing layer is presented in the article by the Gateway + some sort of language runtime.

For the web server layer the most common options are Apache and Nginx, while in processing layer there are many other options.

Let’s start off with the least common options: 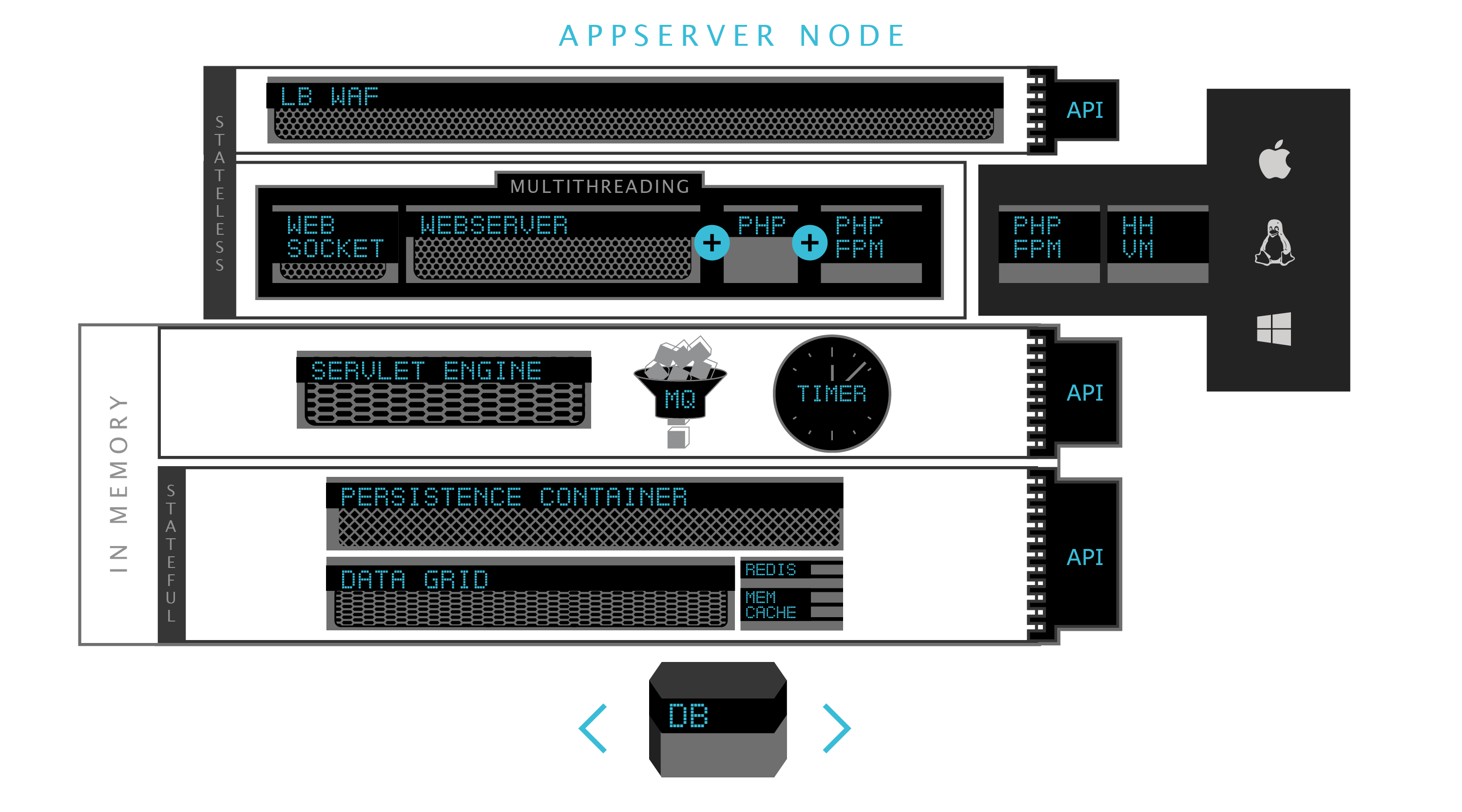 There are many ways to host PHP web applications behind an Apache web server, the most common are mod-cgi and mod-fastcgi and mod-php.

Apache by itself can’t interpret PHP files, however it has a module named mod_php that does. When loaded the module starts the PHP interpreter after Apache startup.

This approach is much faster than mod-cgi, since the PHP interpreter is started once, and the code is executed by the Apache process itself, eliminating the startup time (on request).

However mod-php is less secure(tight coupling between the web server and the php interpreter), more cumbersome since we need to start a fat process containing the php interpreter even when serving non php files (static files), also it does only support mpm-prefork in which an apache process can handle one HTTP request at a time (this is a side effect of running php in apache).

CGI is a simple unidirectional agent-less text-based protocol which means the web server forwards the HTTP request to the CGI script in a standard text format, and and wait for its output. Given that CGI is so limited and slow scale.

Then comes FastCGI, It is an improvement over CGI. First it is a binary protocol, which make it a bit faster, also it is bidirectional and rely on an agent i.e. it requires a communication socket (TCP or UNIX) between the web server and the php agent(the program responsible for PHP code interpretation).

As its name stats php-fpm is a process manager, When it starts it creates a pool of processes that are able to process php files.

One important thing to note is that PHP-fpm can only handle php files, and can’t serve static files it self. So it often get deployed along-side a web server (Often Nginx). 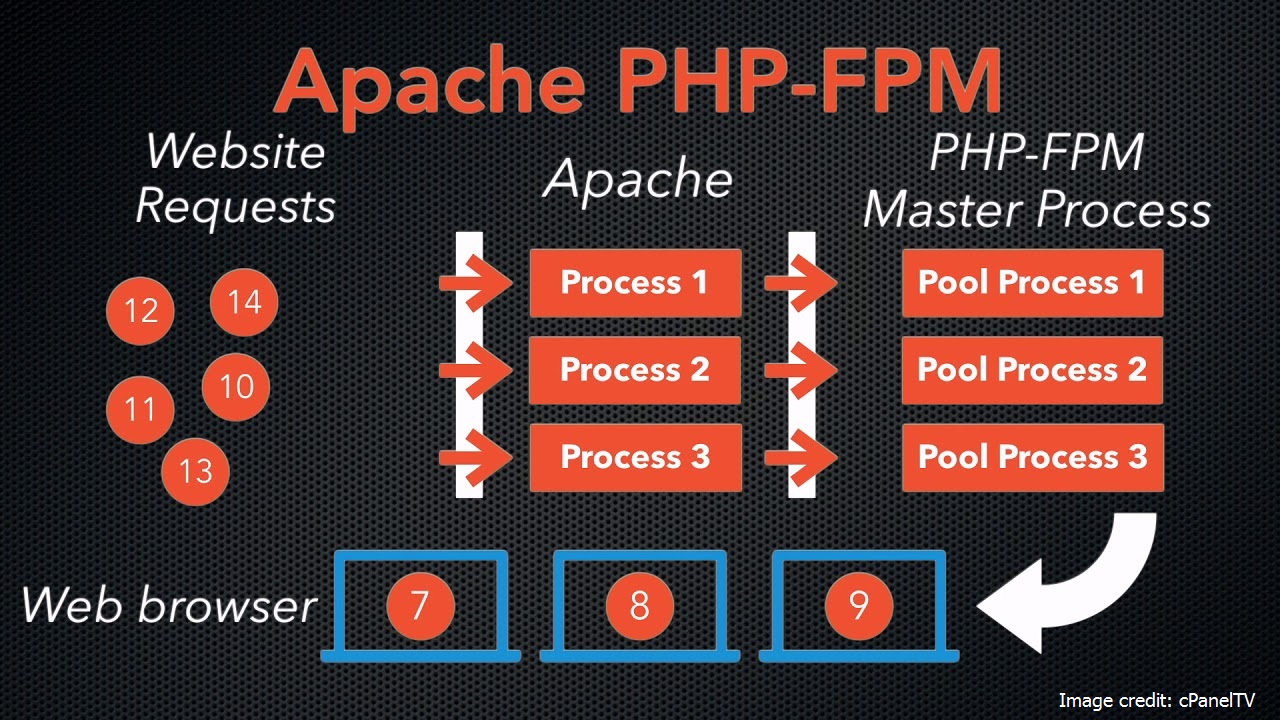 in the next posts we’ll go deeper, and try to explore the different approches we talked about especially in containers and kubernetes context.

That’s it! Thanks for reading 😁

and See you soon

EDIT 1: I would like to thank the community for their positive feedback especially Mr. @Mohamed El Hachimi El Idrissi with whom I had an very interesting conversation. Hopefully I’ll be able to summerize my conversation with Mohamed in the next post.